A little over a year ago I wrote about my experience getting the NBN and concluding that it was a massive disappointment. I ended with

Anyway thats the end of it. A 7 years wait for internet that I guess might be the envy of people living in Libya.

Obviously since this post I have something more to say. NBN changed their policy allowing you to get a TCP (technology upgrade) quote without having to pay. Of course I tried it. The dollar amount was not small but with the WFH situation continuing to be a thing, the constant slowdowns I got from FTTN due to I think interference with other devices outside my control, and that I was less than happy with a 75/20 connection I pulled the trigger and started the TCP process.

What follows is my experience. 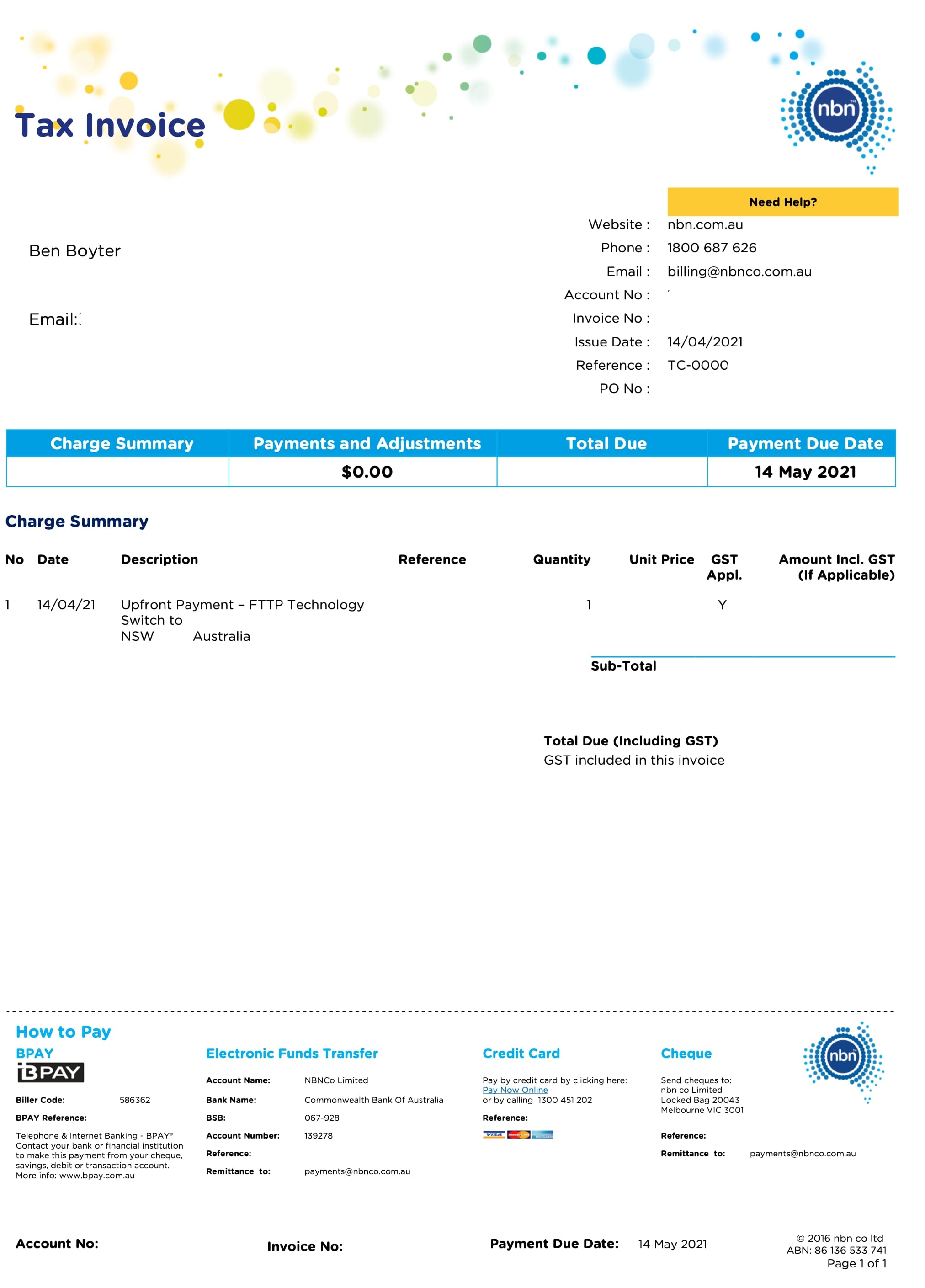 I accepted quote on the 14th of May 2021. The acceptance of the quote and payment was easy. Done in less than 24 hours from it being issued with a direct bank transfer. This is the Stage 1: Application portion of the application.

Stage 2: Construction and connection, takes considerably longer, and started on the 14th of April 2021 according to records. For the majority of this there was no activity I could see. Then one day NBN techs turned up wanting to identify the conduit to the house and the pit that lead to it. This was for planning, including where the NTD needs to go in the property.

Due to the pit being buried a long time ago this was difficult to identify, and there were a few return visits to identify where conduit and pits were.

What was interesting was that the neighbors had a better idea of what was going on at this point than I did. NBN’s communications were generally non existent beyond people turning up at the door. The install of fibre itself for instance was a surprise, and on the 13th July there was an army installing things, including the front pit. 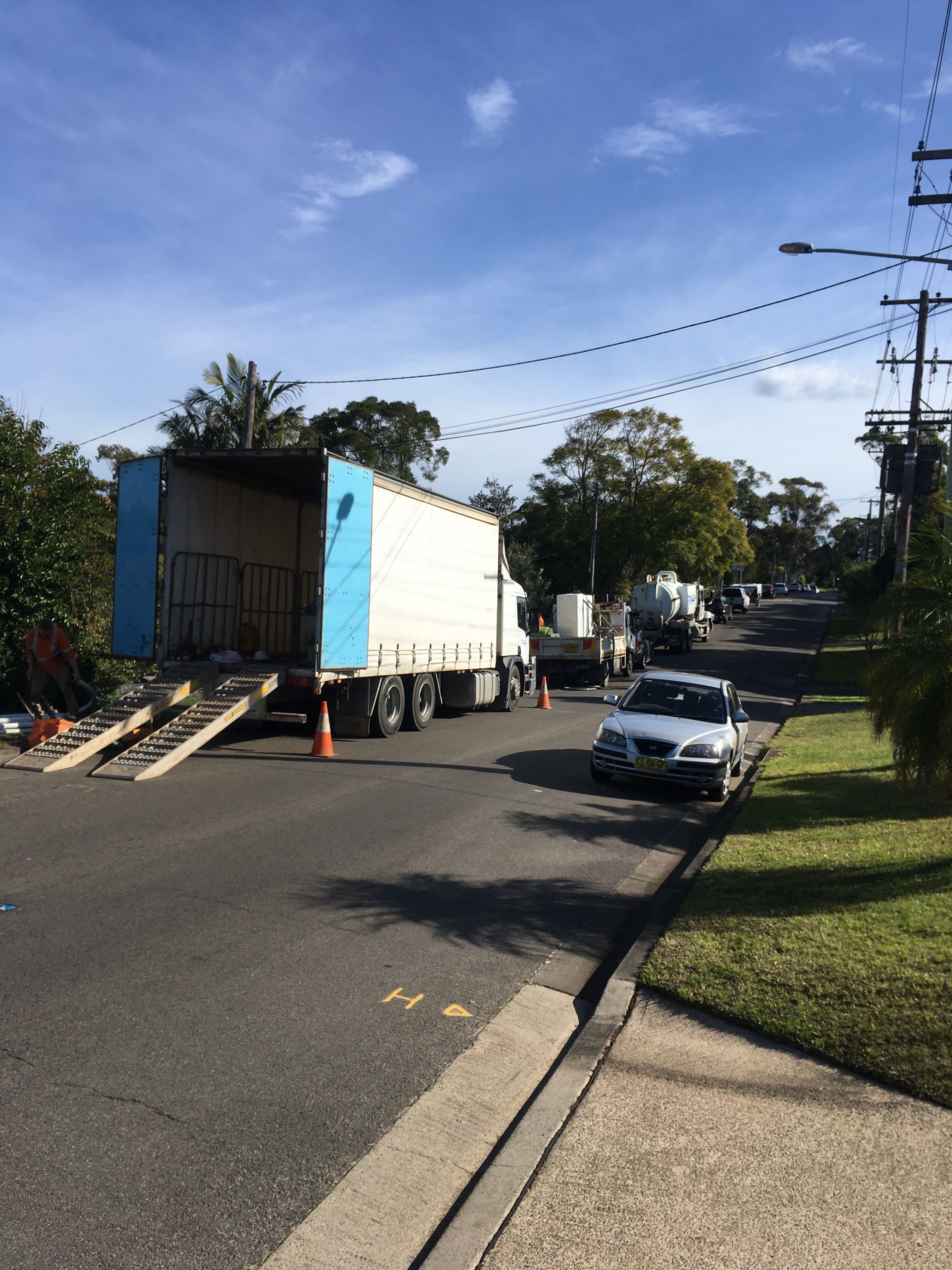 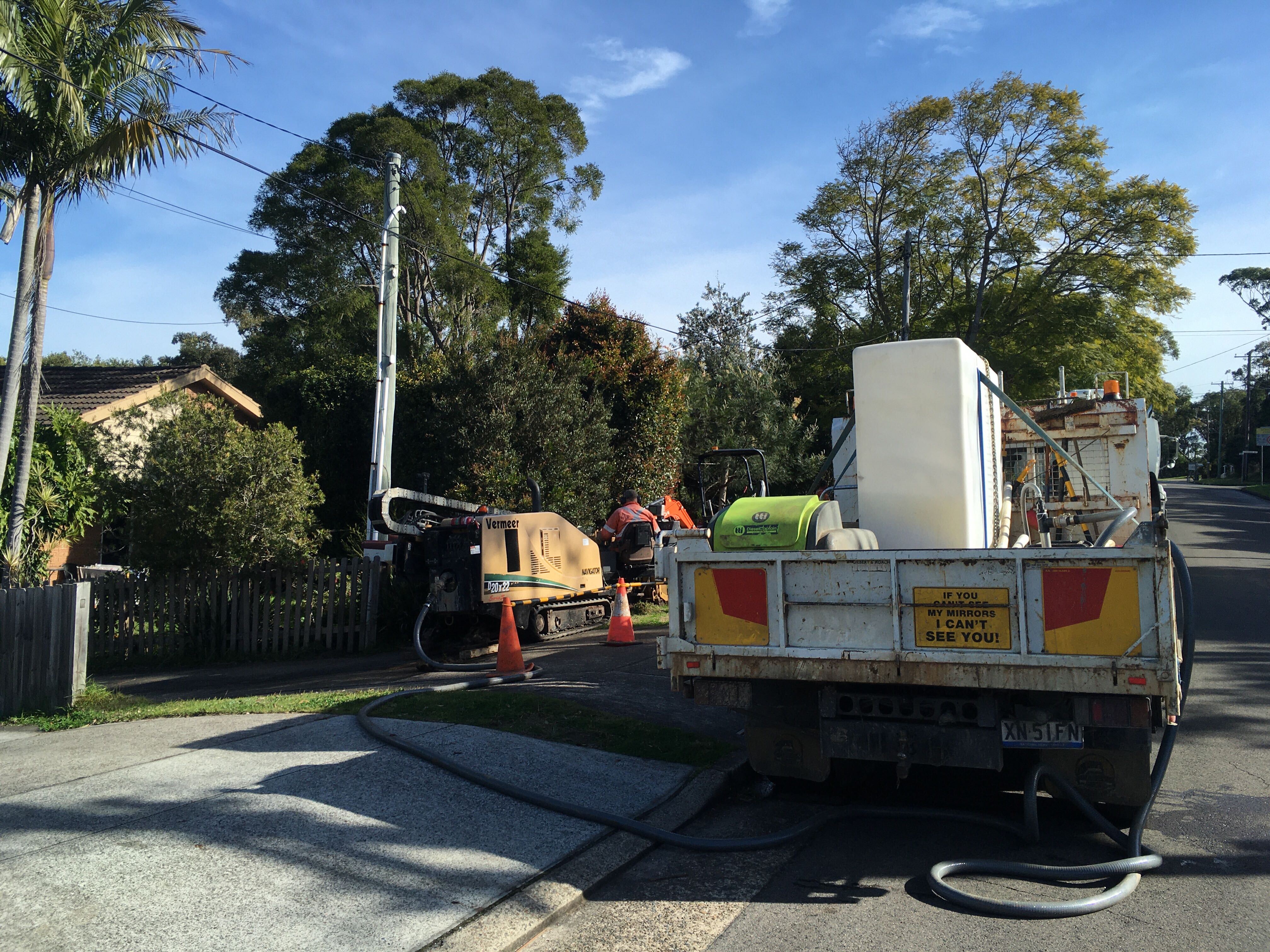 You can see the install in progress above including the drilling to run the conduit and fibre back to the NBN network.

At one point there were 3 trucks unloading cable, and various other things. Something like 15 people for this, blocking parts of the street and generally confusing the neighbors who all were pestering the contractors doing the install.

With the above done, it was a matter of just waiting for the fibre to be run to the house and installing the NTD.

Of course, nothing would be complete in 2021 without mentioning COVID-19. Which of course got in the way and caused a 2 week delay due to the construction shutdown in NSW. Once that was done however NBN were back and installing the NTD and running fibre into the house. 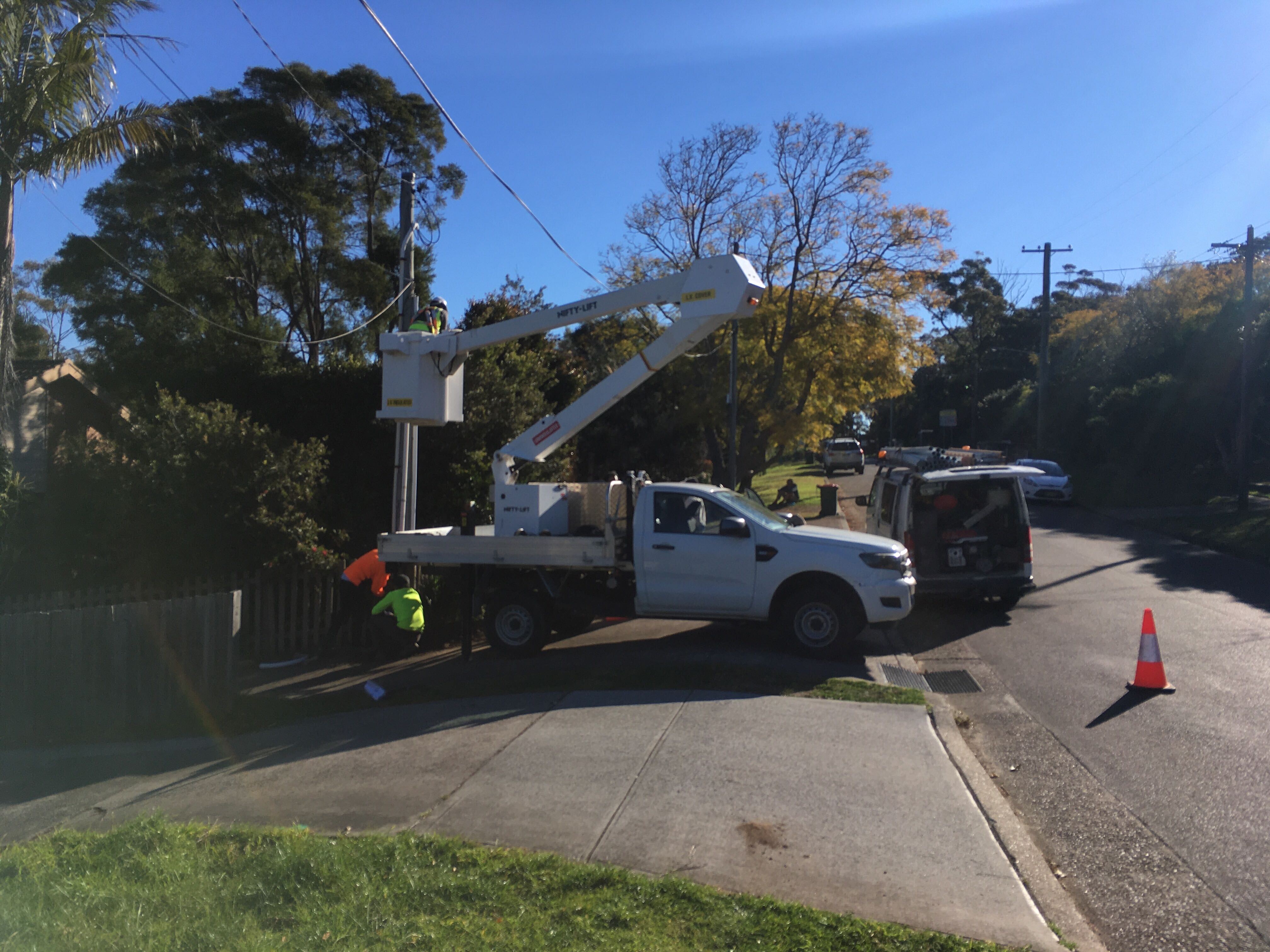 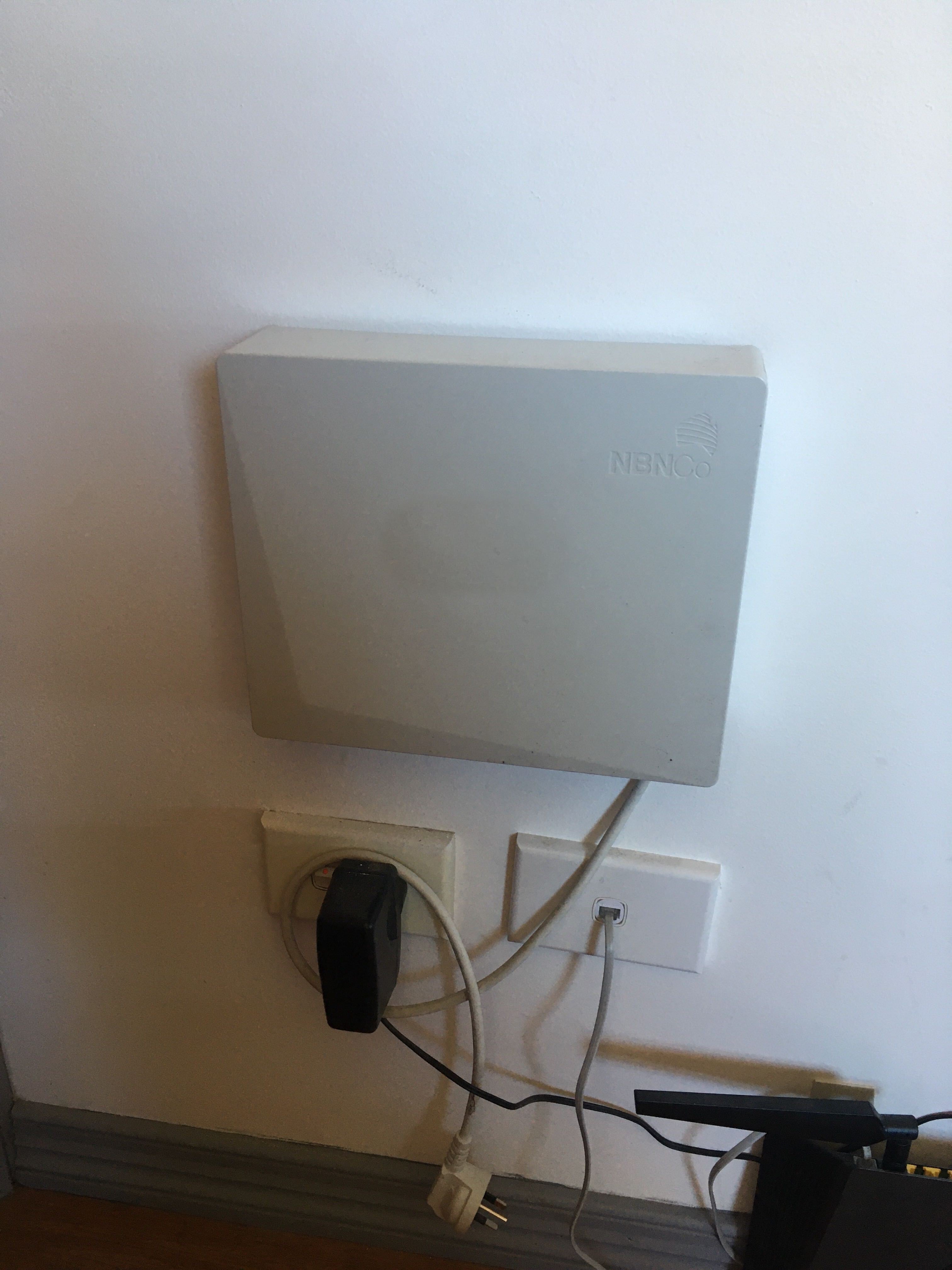 After the NTD install, and a little diagnostics, the little light went green indicating that the fibre was active. It should be noted NBN does not seem to install the battery backup anymore. This isn’t a huge issue for me, as I would have pulled the battery instantly to avoid it beeping at some point. I asked about this and it seems its only installed now for premises that need a 24/7 connection. At this point its a matter of waiting for NBN to do some tweaks on their side. A few days later I got this email,

Of course this in itself was not very useful. How has it progressed? Can I connect now? Checking the NBN progress site showed the following,

Which indicates that the progress has reverted? Are NBN coming to rip things out?

Thankfully, Aussie Broadband was able to tell, and I quickly signed up in the application and the next morning everything was done. I had previously bought a Google Wifi Nest Mesh network to run everything, as it was recommended by Aussie themselves and reviews indicated it to be one of the most hassle free Wifi Mesh networks.

A few days later NBN updated its progress as well.

So the final result? On the router itself, the speed test is very promising. 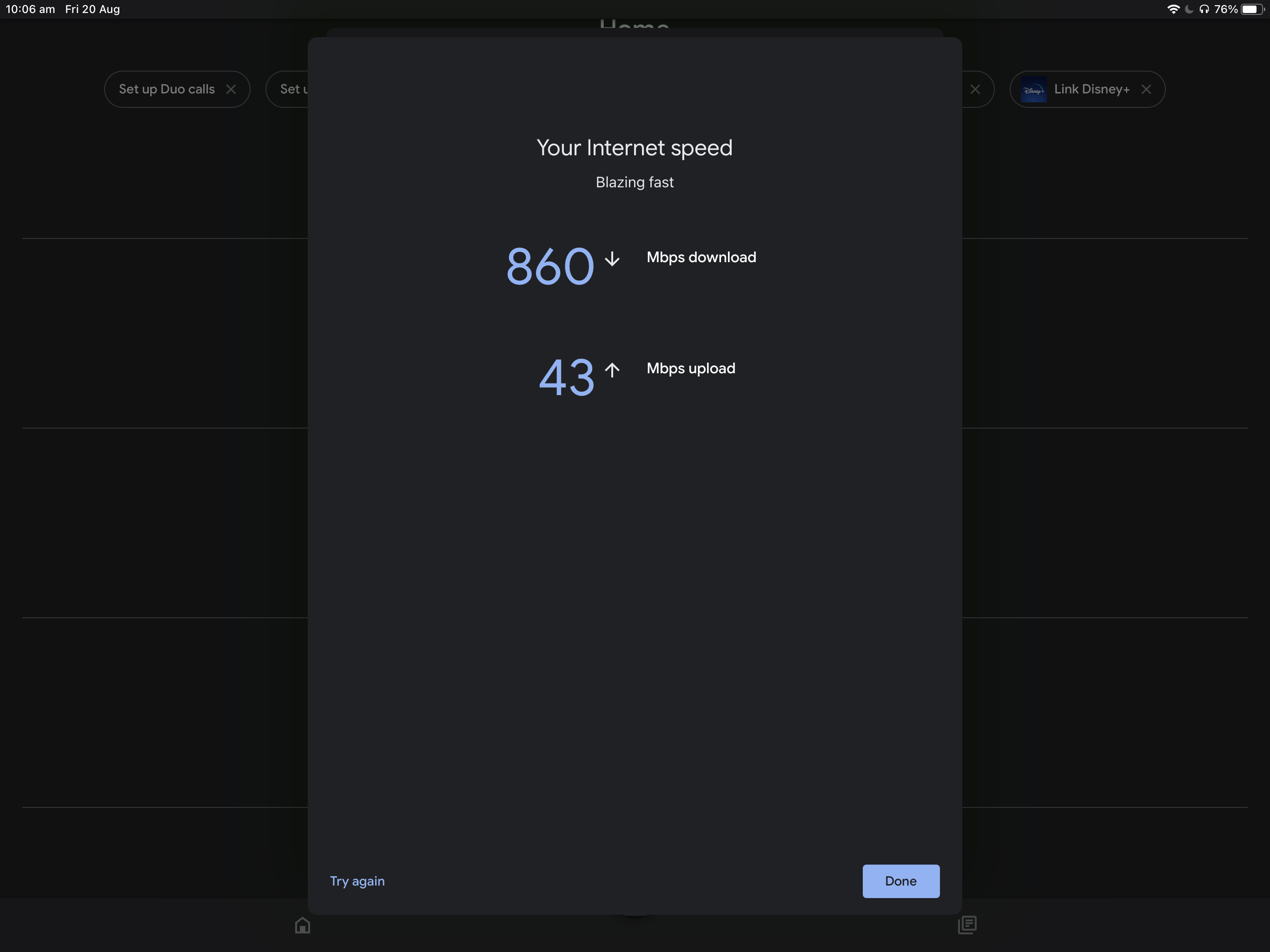 I have done other tests occasionally and it usually sits above 750 Mbps download and 44 Mbps upload. Which is excellent.

Over WiFi is a slightly different story. Next to the router itself to give it the best possible chance gives results like this. I have seen it go as high as 500 Mpbs but its usually in this range. 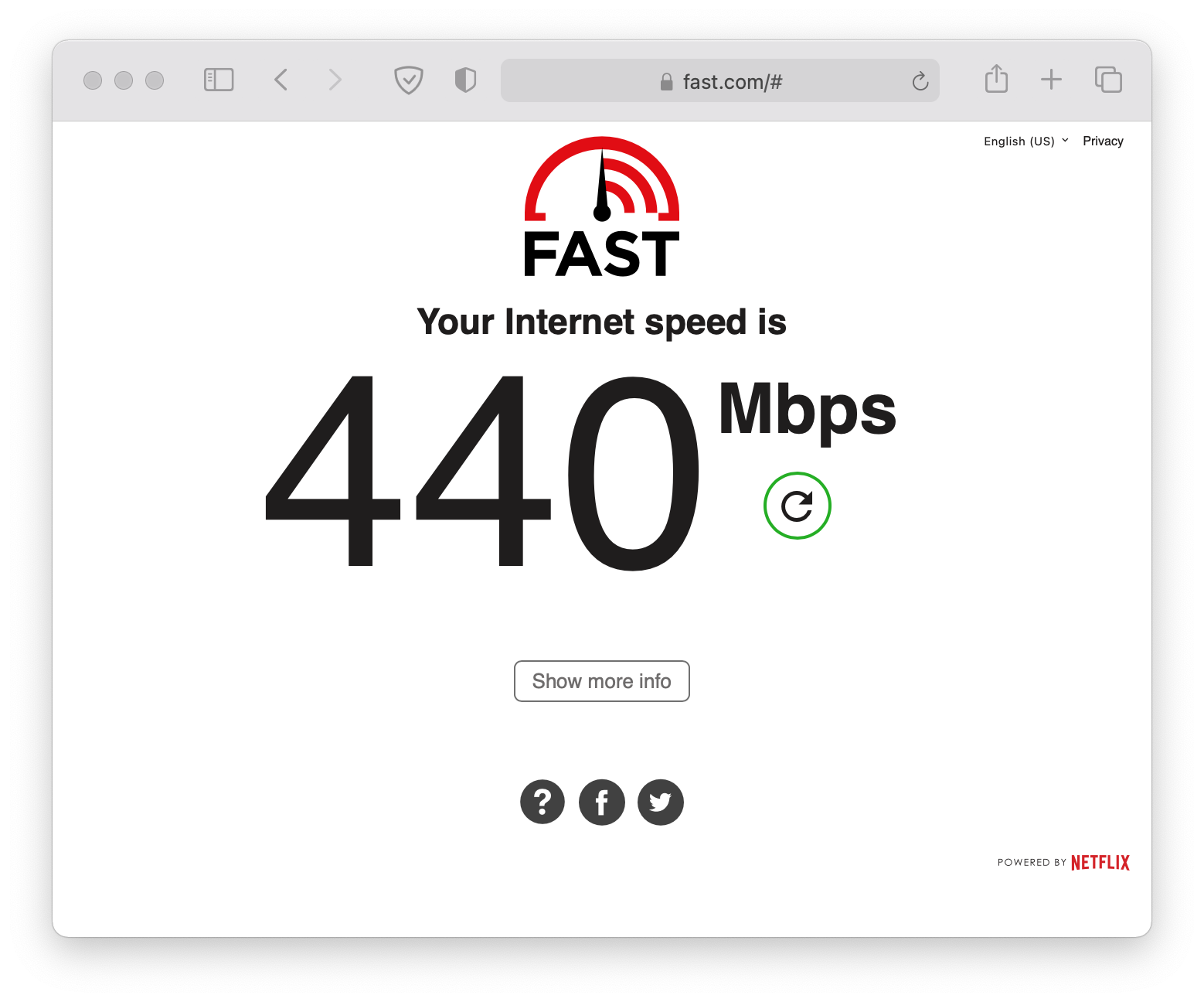 Usually when I am in a more likely spot to sit I get around 200-350. The further away from the router or mesh points of course it lowers, but generally its over 100.

When WiFi6 no longer costs an arm and a leg I will upgrade the router to that. Ideally though I would like NBN to change their plans so I could drop down to a 250/100 plan or something similar, giving me more upload and a download that I can fully use.

The connection itself has been rock solid, with no slowdowns/dropouts anymore and even with a huge amount of rain there as been no noticeable difference. Previously this would ruin my internet connection.

So with that done, thats the end of NBN for me. I have achieved the end state, with the best possible connection that you can get on the network. I didn’t like how I had to get there, but I am at least and can focus on other problems in life. A fairy tale ending? Almost. Certainly a bittersweet one.